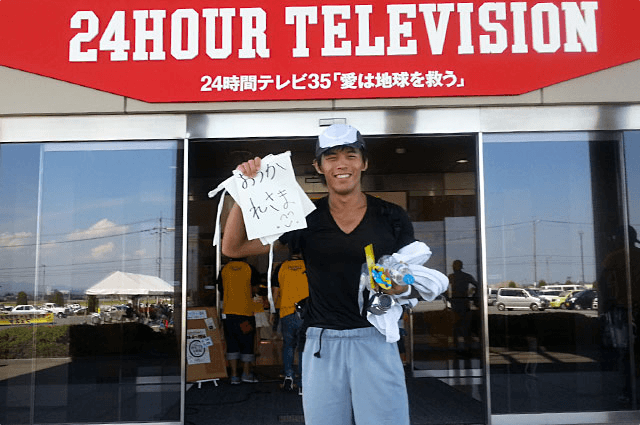 Kazu, a famous Japanese blogger, who visited runtastic´s Headquarters in July, has just completed his new mission: running 100 km for the first time in his life! He was motivated to run such a long distance because a well-known Japanese TV program 24HOUR TELEVISION “LOVE SAVES THE EARTH” was being broadcasted across Japan on the same day of his challenge. Team runtastic was honored to support him with the use of runtastic PRO app and our Live Tracking system. During Kazu’s 15 hour run, the runtastic app recorded every detail of his performance and shared it in real-time with his fans and supporters from all over the world. His fans provided a constant stream of live comments and 2,991 cheers. Kazu told us that he received all those cheers directly on his smartphone. As soon as he would start-up after every small break for drinking or eating, he received more cheers and he knew that people were “following him”. He appreciated the cheering, especially at 4am (after 9 hours of running) when he started to hit the wall, even though he is a well-trained athlete. There were also people coming to help him on the way: a boy on a bicycle lighting his way at night, a man offering a Red bull, a woman waiting for him with a cold towel…

His brother also showed up to run with him in the last 7 km, when Kazu barely had enough energy to continue. Finally the end was in sight at; the gate of Fukui Broadcasting Corporation (FBC) building. Kazu saw many people waiting for him and he found added motivation to finish. Cameras were focused on him and he could even see his parents rooting him on, even though he had not informed them of the challenge so they would not worry. Later FBC broadcasted his emotional finish as ‘News of the Day’! Through this challenge Kazu wanted to show teenagers that “if you try hard, you can do anything”. When he was their age, he was the second to last runner in his class, and now he just completed 100 km!

Have a look at the amazing video at Kazu’s blog: http://kazuch.com/463.html

Kazu thank you very much for sharing such a motivational experience with us!