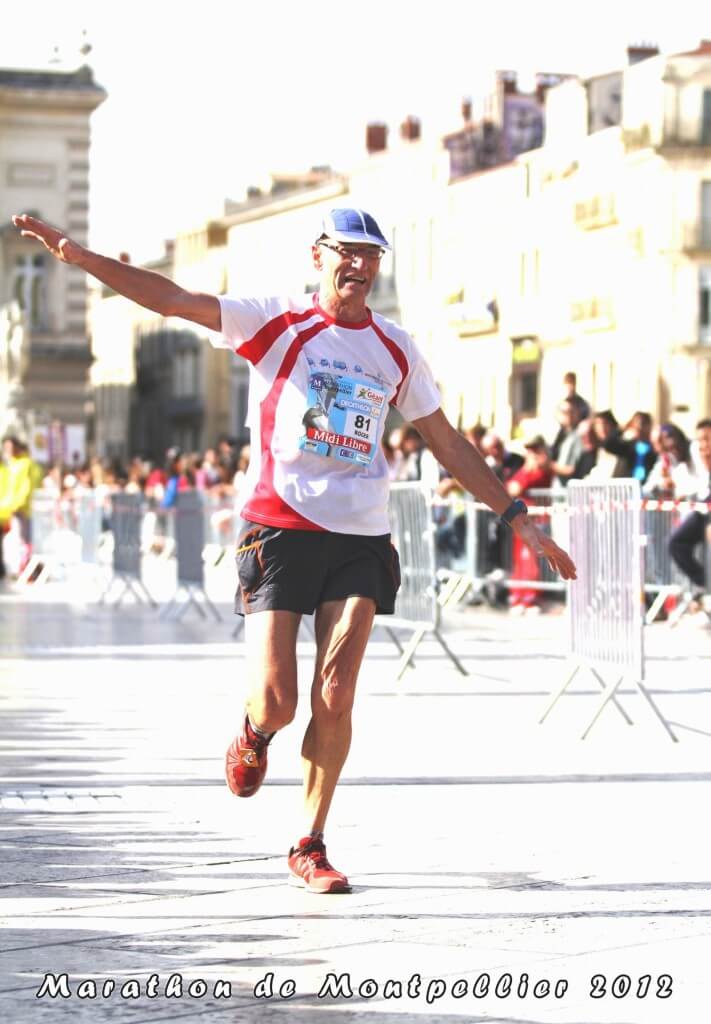 Fifty-seven year old Roger Guillaumin is passionate about running. Since getting started in 1987, this French man has run around 46,000 km, 110 marathons, a dozen 100 km races, and the same number of 24 hour races. He is the French record holder of 2012 with 30 marathons in one year! We chatted with Roger recently and he shared a bit about his passion, his motivation, and his goals for 2013.

How do you train?
Since the beginning of 2013, I have already run 1,000 km – just during trainings. I focus on my endurance most of the time, because it is the most important for me. I’m running for fun, but get out there no matter if the weather is too cold and too warm. It’s completely normal for me to run 30-40 km at -10° C in the winter or 30° C in the summer.

What is your motivation?
During my childhood, I lived on a farm. It was sometimes hard, because I had to help my parents, but it was really like a sport. I began to run seriously when I was 30 and it became a complete part of me. At the beginning, I ran because of the beauty and majesty of the mountains. I took part in a lot of trail races during my first 20 years of running and enjoyed the beautiful landscapes of the French Alps. But for about five years now, I’ve been running almost exclusively marathons.
For me, a marathon is not an insurmountable obstacle. I have run a lot of 100 km races and a marathon is not a long distance run for me. It requires only three hours and few minutes of my weekend! After that, I can enjoy my time and discover a new city, including: restaurants, museums, and the parks. In this way, I can satisfy my natural curiosity.
Obviously, my primary motivation is to stay young, fit, and healthy as long as possible. My resting heart rate is 42. Moreover, being the record holder in France with 30 marathons (in 2012) is an honor. I am also proud that my times are pretty solid: an average time of 3 hours and 08 minutes (3:08:00) for my 10 best marathons! In the fall season of 2012, I ran 16 marathons in 16 weekends and one time I ran also two marathons in one weekend (3 hours 45 minutes on Saturday and 3 hours 22 minutes on Sunday). It was amazing!

Why is running important to you?
Running makes me feel great and extremely free, because I have the chance to discover new locations and meet new people. It is also a good excuse to travel abroad, for example, when I ran in Geneva, Lisbon, and Pisa (Italy) last year. Moreover, I’m really satisfied when I’m able to set and subsequently achieve my goals.

What is your best marathon memory?
Being 53 years old and being able to run a marathon in under three hours during the Nice-Cannes Marathon (second-largest marathon in France, after Paris) in 2009: 2 hours 59 minutes 07 seconds (2:59:07).

Some advice for Runtastics?
Drink a lot of water. It is really essential.

Don’t confuse training and racing. During a race, you have to moderate your adrenaline to have enough energy for the last kilometers. Don’t look at your watch too much. Rather, look around you, look at the people who are there to support you, and enjoy the beautiful landscape or city right in front of your nose!

Update, November 2015:
2 years have passed and Roger Guillaumin is still running. In freezing cold or scorching heat – doesn’t matter. Over the last 2 years, he has completed more than 50 marathons in his native France, as well as Switzerland, Germany, and even Iceland. The latter race was a special experience and an amazing opportunity for him to discover the country and all its beauty. Roger had his best results in Paris, Annecy, Tours, Venice and Pisa, finishing all of them in a little more than 3 hours. Plus, he managed to run 6 marathons in one month, earning a place on the podium 3 times. Roger’s personal goal? By May 2016 Roger hopes to have run a total of 200 marathons.

The now 59-year-old Roger wants to motivate people to work towards their goals. Even if these still seem far away. Running a marathon is a good example. You have to train hard and work out regularly, but if you keep your goal in sight, you can make it. Even if progress seems slow, anything is better than sitting at home on the couch and doing nothing for your health.
***

4 Benefits of Bodyweight Training and Exercises to Improve Running Performance

Sweating and Sports | What is Sweat? Is More Better During Exercise?

Morning, Noon, or Night – Is There a Perfect Time to Run?