Coming soon: Start your Runtastic run with iOS 10 and Siri 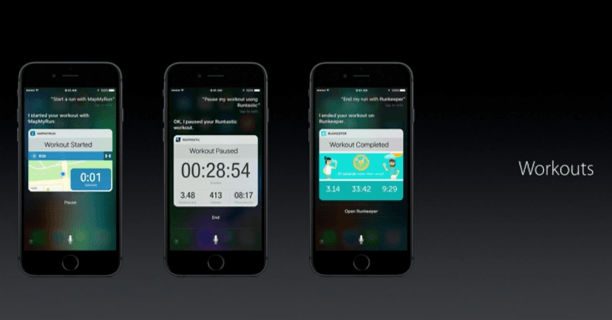 Tuned into the #wwdc16 keynote today? Did you hear the awesome news?

That’s right – Apple announced today that our users (yup, that means you!) will soon be able to use the flagship Runtastic Running & Fitness app with Siri commencing with the launch of iOS 10. What’s more: Runtastic was one of just a handful of companies selected to create a beta version of the new interface before the opening of the API was announced. #firstmover #proud

So what’s this mean at a glance? iOS 10 makes starting a workout with Runtastic quicker and even more convenient, as you can now ask Siri to start a new workout and more. Siri will display the familiar look and feel of the Runtastic app, including timers, maps and workout summaries, making it a seamless (and fun!) user experience.

Siri & Runtastic Details
With Siri, you’ll be able to start, pause, resume and end your Runtastic workouts using simple voice commands. Not only does this hands-free option offer a new and engaging user experience, Siri will also allow you to verbally set a goal for your upcoming run, walk or bike ride based on distance, time or calories, for example, “Start a 20 minute run with Runtastic” or  “Start a 5 mile bike ride with my Runtastic app.”

During and after your workout, your self-selected, top-priority workout details (typically duration, distance, pace and calories burned – just think of what you see on the main screen in your Runtastic app) will be displayed directly within the Siri interface and you can click through to the Runtastic app for full details, if you like.

Why This Matters
The functionality announced today is not only valuable and interesting for current Apple consumers and Runtastic users – it also allows all of us to help shape the future of Siri, and more broadly speaking, artificial intelligence for the entire platform. Pretty cool, huh?

Who would have guessed a few years back that we all – the Runtastic team and our incredible community! – would be a part of such innovation 🙂

“It’s an honor to be on the front end of such a cool project with Apple,” stated Florian Gschwandtner, Runtastic CEO and Co-Founder. “And while some people might be walking around asking ‘Why bother with such incremental changes?’ in the coming weeks, the question they should really be asking themselves is, ‘Why not?’”

Here’s to the future and stay tuned for when iOS 10 and this super cool new feature go live!

How to Prevent Inner Thigh Chafing, Jogger’s Nipple, and More During Exercise