From Overweight & Pre-Diabetic to Unstoppable with Runtastic 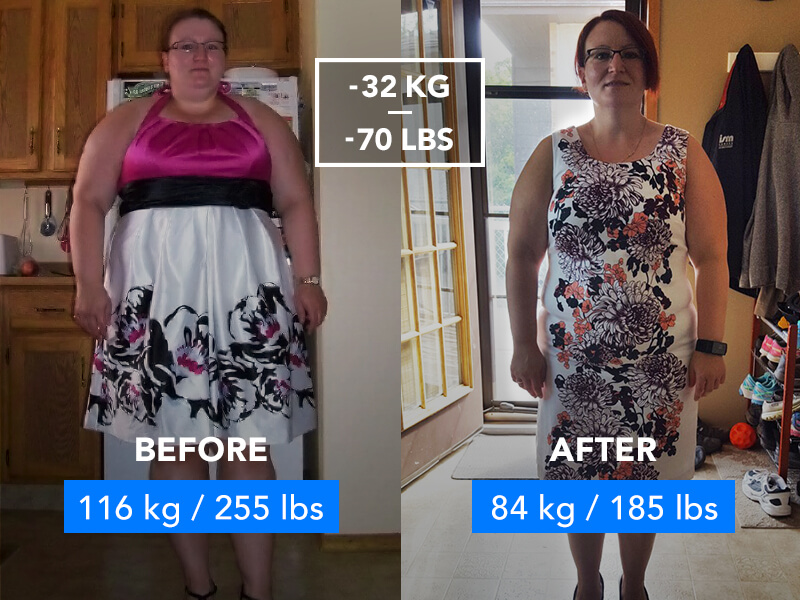 In August 2013, I went to my annual doctor’s appointment. I weighed in at 254.9 lbs (116 kg), which is very high for 4 foot 11 (159 cm) – yes, I am very short. My doctor said my blood tests came back with elevated sugars, and I was pre-diabetic. This news hit me hard. Especially since my dad has been diabetic since he was three years old. Since 2001, he has had multiple heart attacks which could be linked to his diabetes and the insulin he must inject. He has to restrict so much in his life, and I think he worries if each day will be his last.

My confidence was at an all-time low
I didn’t want this life for me. At the time of this doctor’s appointment, I was 29 years old. I was, and still am, a full-time French teacher and I love my job. Then, I coached basketball and led a French Club. I am, and always have been, very involved with school. I had more dreams, but this weight was holding me back.  My students have a goal every year – to see if they grew taller than Mme Irvine. I want to be around for them to achieve this very easy goal. I had grown very uncomfortable being a teacher at such a high weight. My confidence was getting lower and lower. Sometimes, I didn’t even want to go to work or be with people as I didn’t feel right in my own skin. If I can’t like myself, how am I going to be a role model for the 400 students I teach every year? (As a French teacher, I get to see every class in Grades 1-8)

It took a couple of weeks for the doctor’s news to sink in. I had been overweight since I was 12 years old. I’ve tried every diet that you can name – counting calories, Atkins diet, Slim Fast, Weight Watchers, a program called TOPS. It all ended in the same result – giving up with barely any results. In 2011, I had decided that it was just who I was and I would stop worrying about the number on the scale. I was only 230 lbs (104 kg) then. But just 2 shorts years later, I had gained another 24 lbs (11 kg). I knew this wasn’t going to work for me. 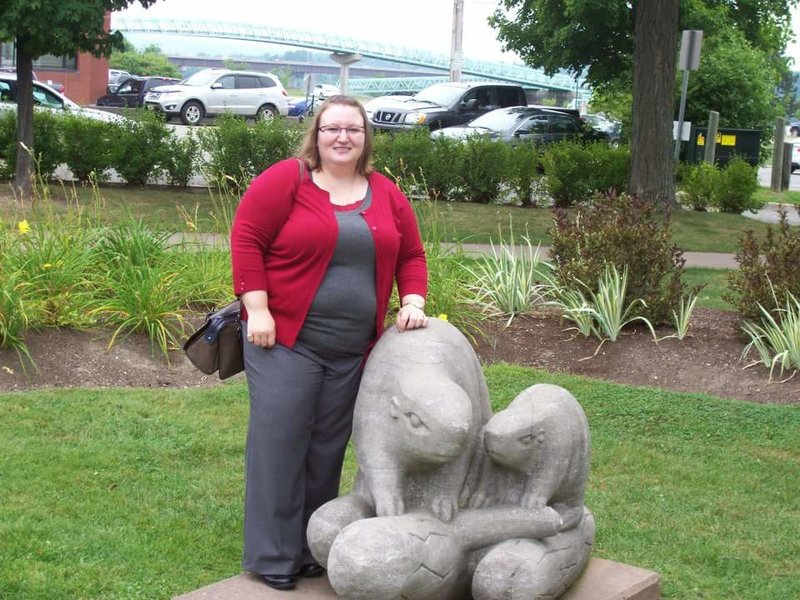 The gift that changed my life
I had to decide what to do. I was too uncomfortable about my size but too busy to get to the gym. Additionally, I just couldn’t do anything outside. I couldn’t let anyone see me exercise outside in public… yet. So my partner, Brad, bought me a treadmill when I expressed my goals and fears. I started walking. I would walk at least once a day for 5 km on the treadmill. I would do other activities on a game console. I continued to watch what I ate, but adding the exercise paid off.  I lost 30 lbs (14 kg) from September 2013 to March 2014.

By March I felt better about myself. I took a walk outdoors in a park near my home. I had lived in this neighbourhood since 2010 and never realized that there was a park with running paths that connected all over my city. It was like being outside of the city while still being in the city. I became a bit bored with walking. I felt like I needed a new challenge. My brain came up with the idea to run. I laughed out loud to myself. I’ve never been a runner. I played softball growing up and still did as an adult. As a kid, I also played some basketball. But actually going out for a run every day was something I never even considered. So I tried it. In 20 seconds, I was gasping for air and making every excuse in the book why I shouldn’t keep going: I was asthmatic, this wouldn’t work, walking is enough. But, I decided to ignore the excuses and that’s when I downloaded the Runtastic app. I started doing interval runs. I worked my way from 0.25 km run/200 metres walk to 1km run/100 metres walk. After that, I switched to 10 and 1’s (10 minutes run, 1 minute walk). I went from a 10:39 minutes per km pace (some days even worse) to an average of 7-8 minutes a km today. 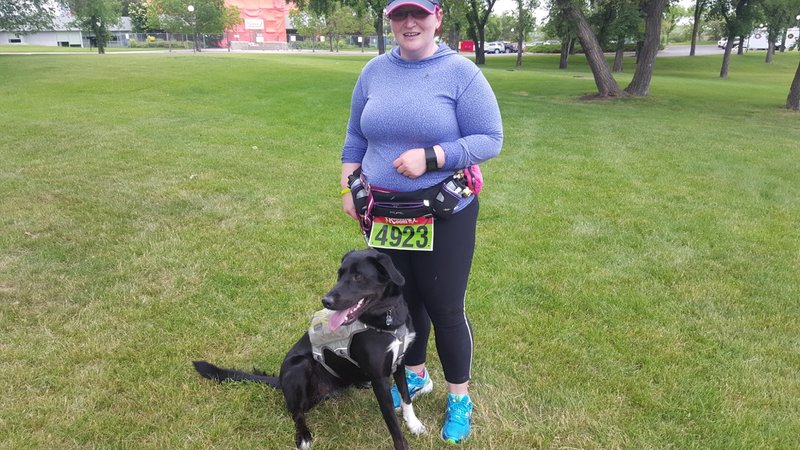 I began to fall in love with running & found my ideal running buddy
The weight was flying off. I was getting stronger and I even began to fall in love with running. I signed up for some 5K running events and made some great improvements in my pace and weight loss. I realized my challenge would come in the winter. If you do not live in Canada, and particularly in my province Saskatchewan, you wouldn’t know that winter typically means -40 degrees Celsius and snow can get up to your waist on the bad days. Even on the good days, we find -20 degrees Celsius warm and it isn’t unusual for snow to go up past our ankles. And for us, winters lasts from October/November until April/May. I proposed to Brad that we finally bring a dog into our family who could also be my running partner. I thought that if I had a dog, he/she would have to go out no matter what the weather, which would keep me motivated to run. So in June 2014, our black Labrador puppy, Ginny, came home. I couldn’t run with her right way – she was too young. So this meant I had to get in my own runs plus some additional short walks for her. This increased my activity level even more. She began to train slowly with me and by winter, she was my running partner.

In August 2015, I went to my doctor for my next annual visit. The blood work was in and my sugars were no longer elevated. She said I wasn’t pre-diabetic anymore and that all my blood work was that of a very healthy and active person. For the first time since I was 10, I had a doctor’s appointment that did not end with a “You need to change your lifestyle.” Now it ended with, “Keep doing what you are doing.” 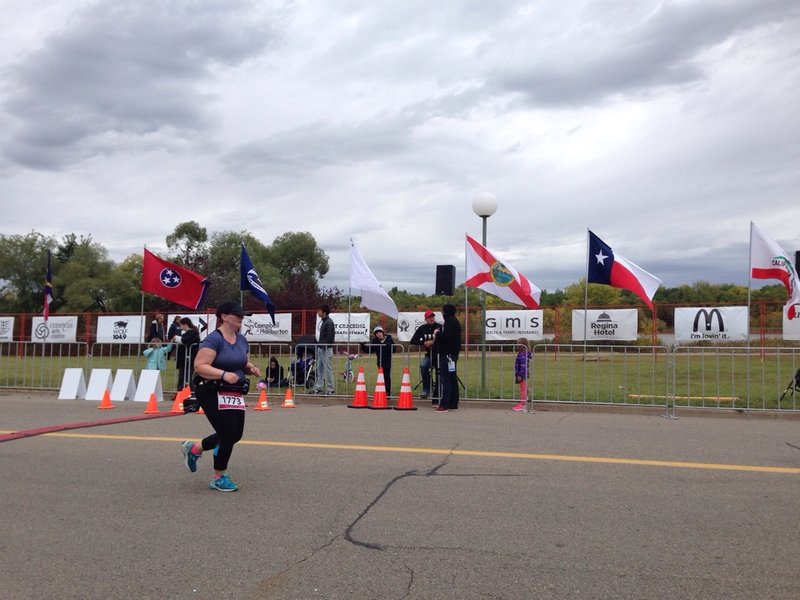 But weight loss-wise, I had hit a plateau hard. I bounced around 194-202 lbs (88-92 kg) from September 2015 until April 2016.  Running felt okay, but not great. Something was missing. Or maybe I had too much of something? I was also beginning to feel unmotivated as all my running didn’t seem to be enough anymore. 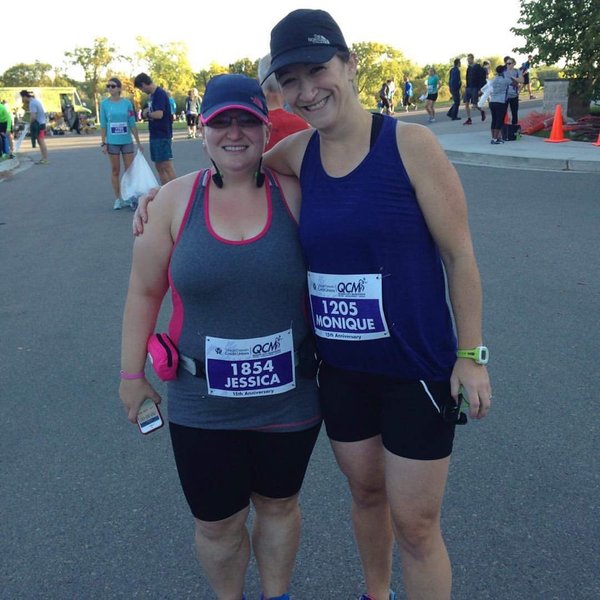 But it wasn’t over, I had much more to learn
I follow Runtastic on Twitter, Facebook, and Instagram. Some posts about adding strength training and about reducing carbs made me consider how I needed to change myself even more. I was now 197 lbs (89 kg), 57 lbs (26 kg) less than when I started, but I hadn’t changed what or how I ate. I realized what worked for me in 2013 when I first began, wouldn’t help me reach my goal. I had to reduce some calories and figure out a better eating plan. I often used running as an excuse to have a treat and often many “treats” for the run I had that day. I realized a treat a day or two a week was fine, but to “reward” myself for running every day and at every meal was setting me back.

I had heard the hype of carb-loading before running. I was doing that. I was eating about 70 percent carbs a day. However, for my body, I actually feel better without eating a lot of carbs before I run or work out. I now prefer to have them after my run and instead I have about 30-45% carbs a day. This worked so well and the weight started to come off again. I added strength training to my fitness routine three to five times a week. I fell in love with kettlebells and dumbbells. I found I even enjoyed yoga! Now, not only was I losing weight, but I began to get toned muscle, too.

Shopping for clothing wasn’t something I dreaded anymore
The weight began to fall off again. I “undergrew” plus sizes. I began to enjoy shopping for clothes. I went from a size 24 to a size 12.  From 254.9 lbs (116 kg) to 185.6 lbs (84 kg) today. More than half of what I used to be is gone, but I feel like I am a whole lot more of a person. I am a new person. I enjoy life much more. I have more energy to tackle my dreams. I went back to school in January 2016 to pursue my Masters of Education while still working full time as a teacher. I find time to develop French units and mentor other French teachers. I now have a school run/walk club once a week in the mornings before school. I just went to a cousin’s wedding where relatives that I rarely see didn’t even know who I was anymore.

Now I am faster and more motivated than ever before
I have more work to do but I feel like Runtastic, with its app, social media, blog posts and community, helps keep me motivated to tie up my runners and get out there. I ran my fourth half marathon just this past week on September 11, 2016. According to my Runtastic app, this run was my fastest 5k, 10k, 21.1km, and best average pace. With Runtastic, I feel like I can keep getting out there and crushing old personal bests and making new ones. I know with Runtastic, I will continue to live the new lifestyle I have worked so hard to develop and now embrace.

And yes, I did return to school this year. And yes, many of my students grade 5 and up were excited to see that they are finally now at their goal – to be taller than Mme Irvine. However, many of them now struggle to be faster than me or run longer than me! Maybe now I can encourage them and others to work towards that.