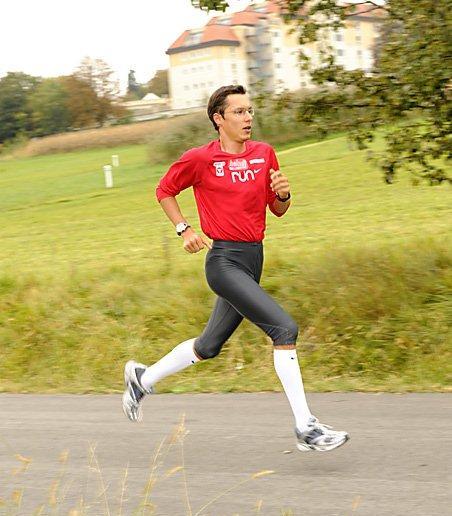 In February, we introduced you to marathoner Günther Weidlinger, who qualified for the Olympic Games 2012. Since then, he’s been updating us on his training. With the Olympics right around the corner, we asked the avid runtastic user to fill us in:

This spring I had to cancel races due to various injuries, but for the last several weeks I have been ramping up my training and working on increasing my pace. I’m very excited about the upcoming Olympiad in London and the thought of running past TowerBridge, Buckingham Palace and crossing the finish line at Olympic Stadium is pushing me on.

Since my injury-related setbacks, I have steadily been increasing my weekly running mileage to around 170 km (over 100 miles) while upping my general strength training, and have seen great improvements in stability and mobilization. A couple weekends ago I was finally able to pin on a race bib number and run in an organized race for the first time in a while. I ran the Puckinger Seelauf race, conveniently located near my home town, Weißkirchen, where I do most of my training.

Before the race, I thought I was just going to need to run a good tempo and not push myself too hard to win. But then I heard from a fellow racer that Elisha Sawe Kiprotich, a Kenyan runner, was also at the starting line. Elisha and I have known each other for a long time and I know that he is a very strong and powerful runner. After only one kilometer it was clear who would win the race, and it was not me! I finished the 10K with a very respectable of 30:41, only 24 seconds behind Elisha. I was extremely satisfied with my performance considering this was my first competitive race after my injury.

Thanks to Elisha’s speed, my kilometer pace ended up being 3:04 (under a 5-minute mile) instead of my goal of 3:10, which was an encouraging sign for London.

For the next few weeks I’ll continue my training inAustria, and when July rolls around, I’ll move my training to the high altitude camp in St. Moritz. There I plan on increasing my strength, endurance and pace and be fully prepared for London.

Train With Your Heroes
Join the Challenge