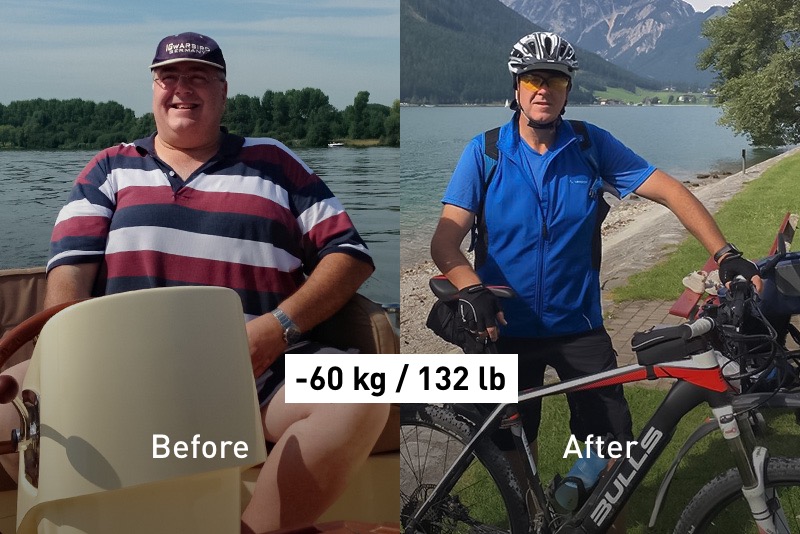 Stress, too little time and private problems: all these factors led Christian from North Rhine-Westphalia to weigh 167 kg (368 lb). “A burger at the fast food restaurant on the corner, a small snack at the next bakery: my sales rep job made it easy for me to find a calorie bomb any time of the day,” said Christian.

A visit to his doctor finally shook up the heavily overweight family man: “He told me I had very high blood pressure (180/110) and would have to start taking medication.” It wasn’t long before he developed side effects. In addition, Christian continued to gain weight and was finally diagnosed with diabetes.

Christian began cutting down on the amount of food he ate every day. He completely eliminated foods like burgers, cakes and sweets. “I learned to put less on my plate and I called my diet the ‘¼ diet,’ because I ate ¾ less than I did before.”

Christian made a conscious decision not to do a traditional diet. “My previous experiences had taught me that they simply didn’t work. And I’ve learned that food shouldn’t be the center of my life,” said the 53-year-old.

“I tried out all kinds of new sports”

Months passed and soon Christian had already lost 35 kg (77 lb). “My blood pressure had also improved a lot. I was able to stop taking medication – and there were no more traces of diabetes. This was a huge boost for me!”

Christian finally felt fit enough to give exercise a try. He started out with jogging and Nordic walking, and today he can run 15 km without stopping. “Over time, I’ve tried out lots of new sports like paragliding and gliding (sailplanes). I’ve also started to ski. And this summer I completed a 600 km bicycle tour. The Runtastic app has been my constant companion.”

Today, 18 months later, Christian has lost 60 kg (132 lb). At his last check up, he had a healthy blood count. “And I feel that healthy, too.” And although Christian still weighs 107 kg (235 lb), he remains optimistic. “I’m going to stick with it and continue to lose weight. It’s going to take time and that’s exactly what I’m going to give my body.”

Have you also lost weight? We’d love to hear about it! Send your story and some before & after photos to mysuccess@runtastic.com.

You can go through life comfortably. You don't hav

A basic crunch isn’t so basic. 😉 Learn how to

Push-ups can be fun too! 💪 Switch it up and tr

Yeah, we all know the struggle with at least one o

Running in the rain won’t ruin your race if you

You're stressed. So you reach for a cocktail. Or a

How to tone all sides of your core? 🤨 Side pla

Every day be HUSTLIN'! 😎 Muscle is built when