Marathon "Batman" makes a scence for a good cause 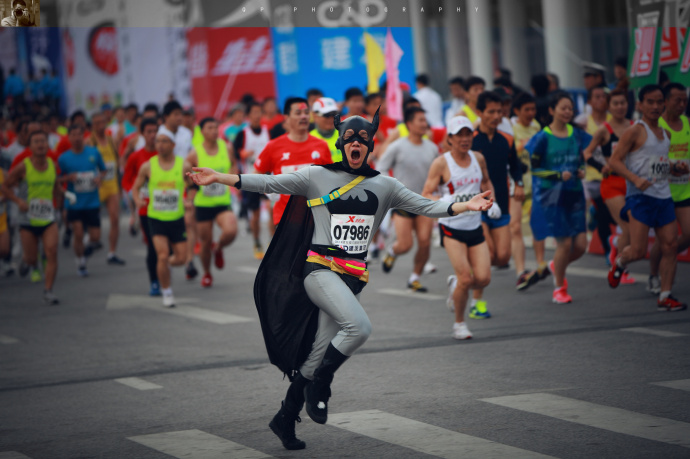 His real name is Deng Jianghua (邓江华). A confident, optimistic, and avant-garde “Batman,” who represents positive energy in society and is a symbol of justice. He is a person who is aiming to engage himself in charity and public welfare services, by promoting health and wellness in a positive way: “Let’s all get together and love our environment, take care of our body, prevent air pollution, draw attention to environmental protection, including: the air, our health, food safety, and vulnerable groups!”

After nearly five years without any exercise (2006 – 2011) Deng became active again in 2011. He ran in the Amway Nutrilite Health Run (2011, Guangzhou) and simply “kept on moving forward” despite the physical obstacles he encountered. He then ran in the Lunar Run Nike 10km (2011, Guangzhou) in 58 minutes and joined his first full, international marathon, the 2012 International Xiamen Marathon, completing with a time of 6 hours and 7 minutes. Thereafter, he continued with the 2012 Guangzhou Marathon (5 hours, 50 minutes),  2012 Zhuhai Half-Marathon (2 hours, 26 minutes), and 2013 International Xiamen Marathon (4 hours, 41 minutes). What a difference one year can make!

Between 2009 and 2012, Deng and his organization helped carry out the charity activities for the “Run for Love – Guangjiang Hundreds Km Run.” The motivation for these activities was to raise money for children who suffer from congenital heart disease. He also advocated the idea of “healthy run” in the 2012 Guangzhou Marathon. He said, “Let’s overcome the vicious implications of obesity through running!” On January 2, 2013, he inspired the community. Due to his one-of-a-kind spirit and inspiring endeavors, Deng has created a sphere of influence in China, particularly in the Zhujiang Delta region, including: Guangzhou, Shenzhen, Zhuhai, Xiamen, Fuzhou, Longyan, and also on the internet.

It is certainly worth mentioning, that Deng participated in the 2012 Zhuhai Marathon in a “Batman” costume! Not only did he wear a costume, his “Gangnam Dance” as Batman became the focus of attention for the entire audience.

“I hope that my special clothing can attract more attention to the environment,” said he.

His personal goal is to run in all the national marathon events in his special “Batman” wear. In the future, he will appear with his special costume in public at least twice a week! He will initiate and take part in a variety of events, including: running, public welfare, volunteer work, and so on.

“To encourage more people to do sports, and keep cancer away!” This is just one of the health and fitness concepts that Deng is always promoting.

As a common citizen, Deng is taking the lead in promoting exercise and guiding friends who have no interest in sports to join in on some workouts and healthy habits. He says, that while we may not have the ability to influence “common prosperity,” we can at least strive for “common health” through sports.

Foam Rollers: What Runners Should Be Aware Of with a Massage Roller