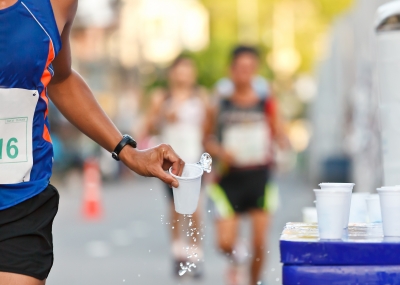 During a race, it can be tempting to run at full speed from the starting line. But running at a consistent speed isn’t the only way to beat that personal record. With the common beginning-of-race bottlenecks that can make passing seem like an obstacle course, why not slow it down? Conserve your mental and physical energy for the finish line with negative splits.

What are negative splits? You’ve probably heard this term thrown around, but what does it mean? Practicing negative splits means running the first half of a race slower than the second half. It could also refer to running each mile slightly faster than the last. If you’re willing to give it a try, we’ve broken down some of the benefits and training tips to get you started:

Warm up
Starting off slower than your actual race pace helps your muscles warm up properly and prevents injury. Your joints will thank you as well!

Speed up
Gradually build up speed when you begin nearing the halfway point of your race. While the runners you’ve been neck-and-neck with for the past few miles may start slowing down, you’ll have a full energy reserve to make up for “lost” time.

Finish Strong
Now you’ll be the one passing everyone else! Flying by the competition will boost your confidence and mental state for the remainder of the run. Instead of feeling completely depleted at the end, you’ll be able to cross the finish line with your head held high.

Practice, practice, practice!
Controlling your pace during a race may seem difficult. But using runtastic PRO during your training runs will help keep your speed in check. Decide on a distance before heading out for a run so you’ll know where your halfway point is. Set runtastic voice feedback to report your pace for each interval so you’ll be able to recognize what your target speed feels like for each half. Check runtastic at the end of your training runs for a chart that displays each mile’s average pace and speed. With runtastic PRO for Android’s new feature, you can see your route traced in color, with faster paces in green and slower paces in red.

Have you tried running negative splits? Let us know how they’ve improved your race times!

Run For The Oceans 2019 – Fighting Marine Plastic Pollution Together

Terms and Conditions for Thank You for Running with Us (Competition)