Patience and Discipline Took My Fitness to a New Level 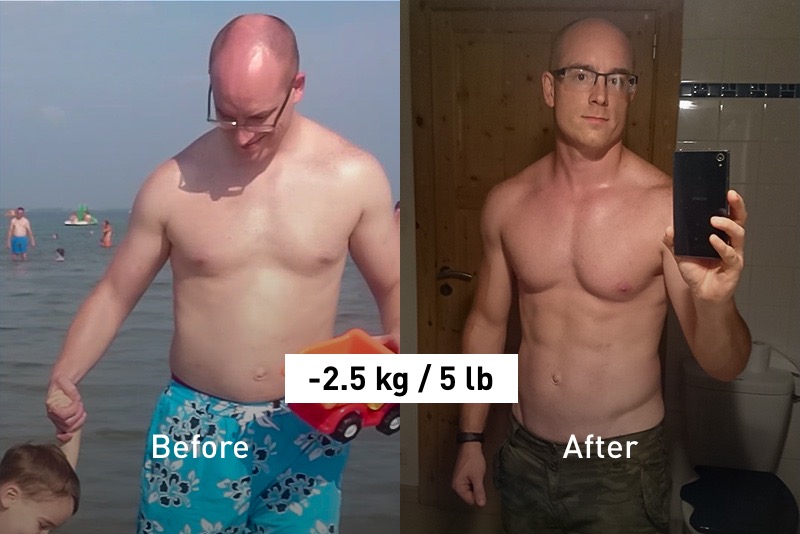 My name is Didier and I was underweight until my 18th birthday. I wanted to gain weight, so I began doing Thai boxing. Later, I started doing strength training, self-defense and many other sports. By 2010, I was 179 cm (5’8”) tall and weighed 75 kg (165 lb) – so I was pretty much normal weight and healthy.

But that’s when things started to get complicated. I got married, underwent an elbow operation, my first child was born, I changed jobs… and I stopped exercising. For six long years. Slowly but surely, the kilos started piling on. The worst thing about it was that I didn’t realize it until I saw a photo of myself on the beach. That is when I knew I had to do something about it.

I began to cut down on the size of my main meals (I used to take in a 2-liter Tupperware full of food to work or eat two big sandwiches). In general, I ate more often during the day, but smaller portions. When I got hungry between meals, I would eat some fruit and vegetables. From now on, it was salad for lunch and a warm meal in the evening. I was often plagued by food cravings, but I stayed strong.

For seven months I was really strict and my weight dropped from 84.5 kg (186 lb) to 75.2 kg (165 lb). My body fat percentage fell from 22% to 10%. I was eating “normally” again and doing a lot of physical exercise: I was using several Runtastic apps; doing push-ups, sit-ups and squats; going running on a regular basis; and getting into jumping rope and boxing. This all-around training helped me run faster and improved my endurance. I began to put on muscle mass and eventually bulked up to 85 kg (187 lb) – meaning that I now weighed more than I did at the beginning of my weight loss journey. So you can see that it’s not always about losing weight. In the meantime, I have lost 3 kg (6.6 lb) and reached my ideal weight.

What I’ve learned: I haven’t lost as much weight as other Runtastic users, but I feel fitter and healthier than ever before! If you want to transform your body, you have to be patient – it doesn’t happen overnight. It requires a lot of discipline, motivation and mental toughness. There were days when I was starving and my muscles ached. But I never gave up! 🙂


Would you like to tell us about your success? Send us your story and some before & after photos to mysuccess@runtastic.com