In Praise of Solo Rides by Greg Heil 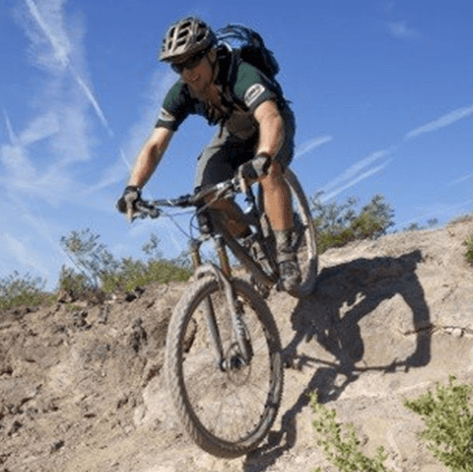 Don’t get me wrong—I love riding with other people. But sometimes a solo ride is just what I need.

Sometimes it’s fun to blaze around in the woods chasing a group of friends, passing back and forth, and stopping every now and then to wait for people to catch up. It’s definitely fun standing around, chatting and drinking beer (until someone decides that we’ve been spending too much time standing still). Then there are other times when I’m riding with just one good friend and we get to cruise around at a relaxed pace. The ride is just as much about the conversation as the exercise.

And then there are the rides—you know the ones—when the “group ride” would be more accurately labeled as a “race without a start gun.” When you have a few guys together who are equally fit, you’d have a hard time convincing any one person that he’s not in the Leadville 100. They are determined to ride their friends into the ground, dangit! There are so many benefits to riding with others, including companionship and motivation. And the best way to get faster is to push yourself by riding with people faster than you.

But sometimes, at least for me, it can get tiring. Yeah, I know getting tired is the point of mountain biking. But I mean tired of waiting for people to fix flats and broken derailleurs, the pressure of keeping up with the wheel in front of you, and the noise of whoops and hollers as someone almost flies off the mountain but manages to hang on. After so many of those rides, the solitude of the forest disappears. Instead of escaping from the busyness of the world, it seems to follow you there.

When that happens, it’s time to ride solo. Solo rides epitomize catharsis. The hustle and bustle of the city fades away. Other human voices? There are none. It’s just me and the woods. There’s no struggle to coordinate schedules and meet at a certain time. I leave the house when I want and get to the trailhead when I want. As soon as I’m ready, I head out and hit the trail. How fast I ride is totally up to me. If I’m feeling like a chill roll through the woods at a pace that would normally cause me some good-natured teasing, no one is there to complain!

Or if I’m sick of the rides that seem like I had to wait at every intersection, I head out alone. I drop the hammer and just ride and ride and ride—for hours if I like—and I don’t stop for anything. I’ll ride until I feel tired, and then keep riding.

So get out there and ride. And if you haven’t recently, try pedaling solo.

Do you like solo rides, or do you prefer to bike with friends? Tell us what you think!

Greg Heil started riding mountain bikes seriously in 2007, and since that time has ridden hundreds of trails all across the United States. He is the Social Media Coordinator, and an editor, for Singletracks.com, which is your source for everything mountain biking: the number one mountain bike trail map database in the world, a daily blog, gear reviews, forums, photo of the day, and more! Be sure to drop by Singletracks.com the site and check it out, and to “like” them on Facebook and “follow” them on Twitter.

Want to Boost Your Performance? >> Learn All About Heat Acclimation