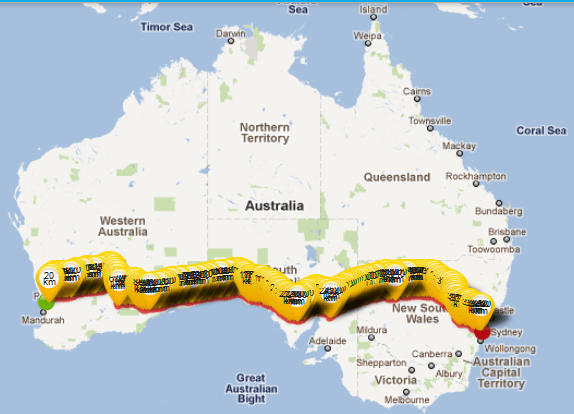 4000 km across the Australian Desert and the whole track non-stop against the clock. These were the hardships that four athletes from Austria went through from
25.10. –  29.10.2011 in Australia. The way from Perth to Sydney was completed in incredible 4 days and 21 hours which is a new world record.

The AusTriaTeam was accompanied by the runtastic PRO app as well as countless runtastic users. The runtastic community supported this mission for a good cause with nearly 10 000 page views and 1000 runtastic cheerings. 1 € per kilometer will be donated to the Austrian Muscle Research.

The world record attempt for a good cause presented an enormous challenge, both for athletes and for the iPhone App. But not only the athletes were very well prepared for the mission, also the runtastic PRO App held promise. The LIVE transmission to the runtastic fitness portal worked perfectly the way of more than 4000 km. Thanks to a battery pack a reliable very accurate record was ​​possible.

The figures demonstrate that the live tracking of athletic performances, especially when they happen for a good cause, is very popular for many people. People identify themselves with the athlete(s) and create a bond to the project. runtastic did not support such an event for the first time. Already the entire IronMan with Christian Clerici 2011 was transmitted live in favour of the aid organization “Licht ins Dunkel”.

Worldwide, runtastic was the first who carried out such a live tracking project and will continue to handle many projects of this kind.

Both, the four athletes and the entire team runtastic thank all users for their great support and the numerous cheerings!