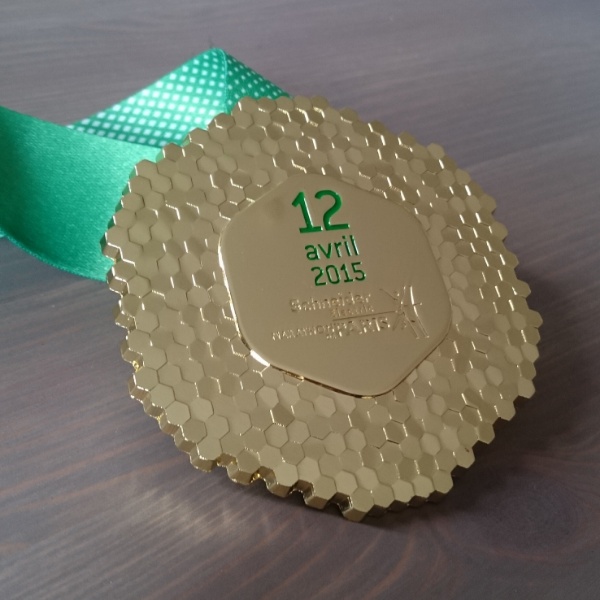 I ran this year’s Paris Marathon in a personal best of 03:35:38, a great marathon through one of the world’s most stunning cities.

My training partner? Runtastic, of course! 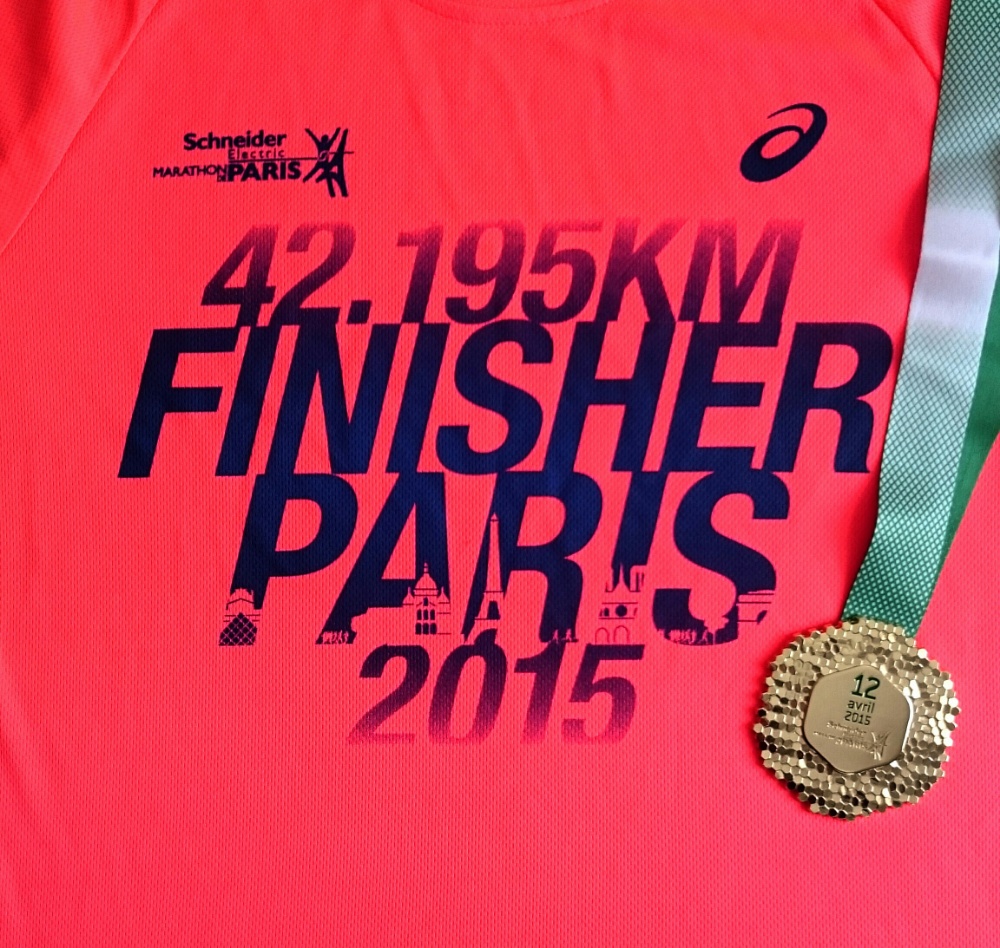 Here’s how Runtastic helped me with my marathon training:

My first step, as should anybody who is setting their sights on a marathon, was to get a training plan, a marathon isn’t something you can turn up to and just ‘wing it’ – well you could, but the chances are it won’t be an enjoyable experience. The majority of my 16 week training plan had me running 5 times a week, it took me a few weeks to get used to the volume of training but eventually I got used to it and begun planning ahead so I could fit in my training around my other plans. But towards the end, I must confess my other plans were planned around my training!

The best part of having my training plan integrated within the Android version of the app, was that I received constant feedback (instead of at each kilometer mark) during my run about how my pacing was – which really took the guess work out of if I’m going too quick or too slow! However, if I was feeling good and wanted to go a bit quicker for my run I would set my own target pace, from within the app to give myself a bit of a challenge. Runners are known for strictly sticking to their training plans, but if you’re feeling good then the occasional run that’s slightly quicker than planned isn’t going to damage your training – quite the opposite in fact! I’ve never trained before with constant feedback like that, I found it really helped me keep to a certain pace and give me a better quality of training. 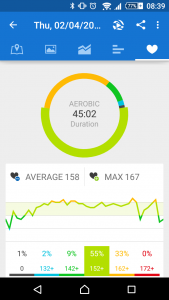 Training for the Paris Marathon was the first time I have trained with a heart rate monitor. After a few months of training with one I begun to know whereabouts my heart rate should be for a given pace, which was ideal for judging how hard I was working. It was great for my tempo runs when I needed to be working hard, and the heart is the best way to tell you how hard you’re running and if you have a bit more to give! However, if you’re heart rate is unusually high during a steady run then it’s a sign of overtraining and it’s time to scale training back a bit. This is something I noticed once during my training. When I checked my training plan I had done a few hard runs back to back as I’d missed a few training days and wanted to fit it all in – I felt fine but my heart rate said otherwise! So I did my next few runs at the lower end of the recommended pace to allow myself to recover not burn out.

The Long Run – Nothing new on race day

Love it or hate it, the long run needs to be done! The long run will get you used to running for a long time and will build up your endurance levels. The long run is also a great opportunity to practice your race day nutrition. Everyone is different so you need to experiment with what works for you, try to eat some carbs before you set off –  otherwise you could find yourself tiring quite far away from home! It’s also wise to practice how much you will eat and drink on the run, the body turns carbs into glycogen which gets stored in the muscles. However, your muscles can only hold so much and will eventually run out, so it’s best to experiment with long run nutrition – whether it’s gels, chews, gummy bears, dried fruit, bars or something more solid –  to keep your glycogen stores topped up. Hydration is also important on a long run, experiment with hydration during training too so you have a plan in place come race day. They say to drink to thirst, but I found a few sips of water every 20 minutes worked well for me, then switching to an isotonic drink after about 1.5 to 2 hours depending on the weather. It does help that Runtastic says how much water I will have lost during my run, I definitely drink more water before and during my run now than I used to!

Having all my runs in one place was ideal as I can see all the stats about my runs and see how I am progressing. Firstly, I would analyze my run in the app after a run, normally seeing how my pacing was as I wanted to improve at getting a more even pace for my runs. Then as the weeks went by, I could see on the website my performance progress stats were going in the right way! My average distance was, unsurprisingly, going up and up! But also my pace graph was going down as I was getting quicker, perfect! 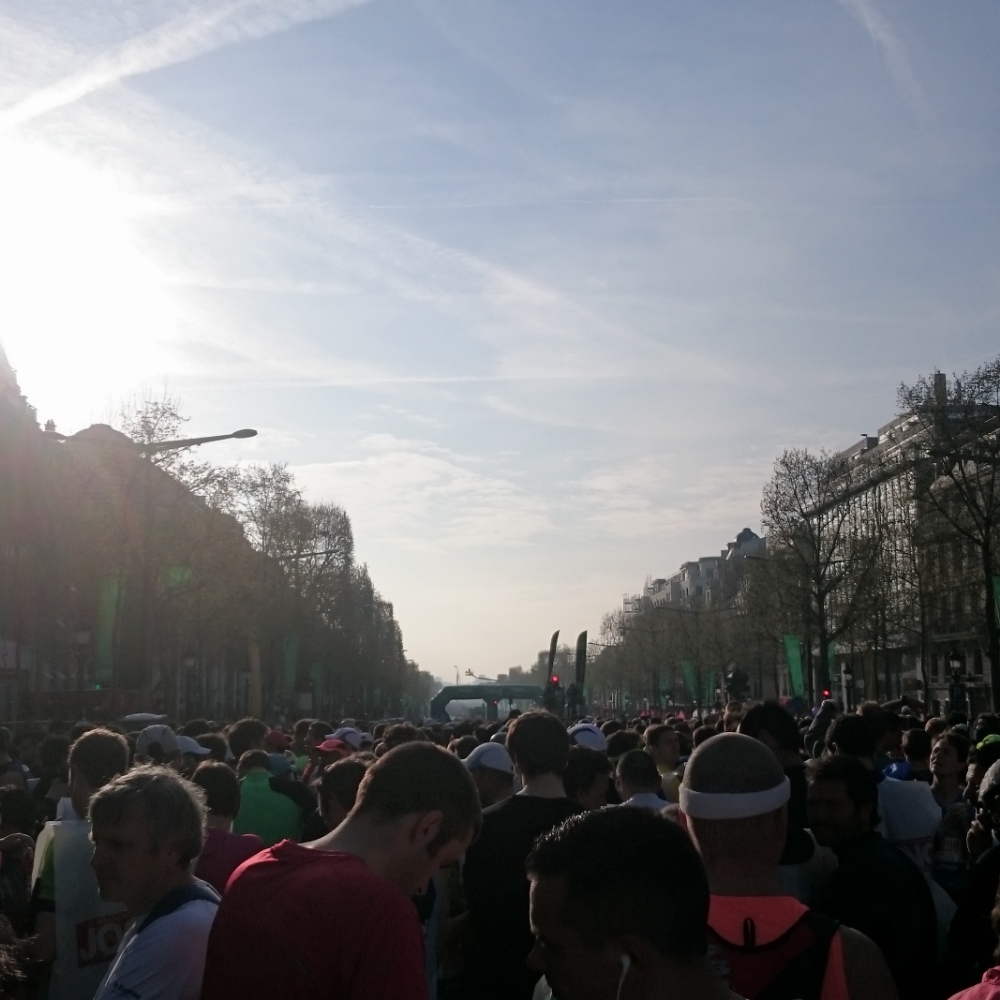 After a few days sightseeing in Paris, I was lined up on the infamous Champs-Élysées with 42,000 other runners ready to run 42km through Paris. The first half of the race was great, a nice route through the city taking in some of the sights, then through a park for 7km before heading back into the city. I felt great and my pacing was more or less spot on! We then headed back through the city, following the river passing Notre Dame and the Eiffel Tower on the way. We then headed out into another park for the final 10km, this is when it got tough as the clouds we’d had earlier had gone and it was starting to get warm! Then around 34km there’s a noticeable difference in my kilometer times, I’d hit it – the wall. Ironically a few kilometers earlier there was a sign saying we’d passed the wall! I also knew why I had hit it, earlier I was too focused on keeping my pace (and sightseeing!) and I’d forgotten to eat something. When I first ate something I was 1 hour 20 minutes into the race, which is almost double the recommended time of taking something in after 40 minutes! I thought I’d be fine at the time but it had caught up with me later on, the next 6 kilometers felt like a slow walk as I simply tried to keep moving forward. Eventually I rounded the corner and I saw the 40km sign, knowing it was only 2km to go, I managed to pick up the pace again.

I was hoping to get under 3:30 but I learned a lesson in race nutrition! In my next marathon I will definitely make sure I eat something sooner and try to stave off the wall as long as possible!

But thanks to Runtastic for helping me achieve a personal best in Paris! 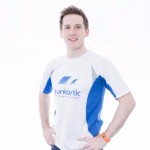 Back Pain When Running: Causes and 15 Exercises to Treat It