The 5 Best Exercises for Travelers 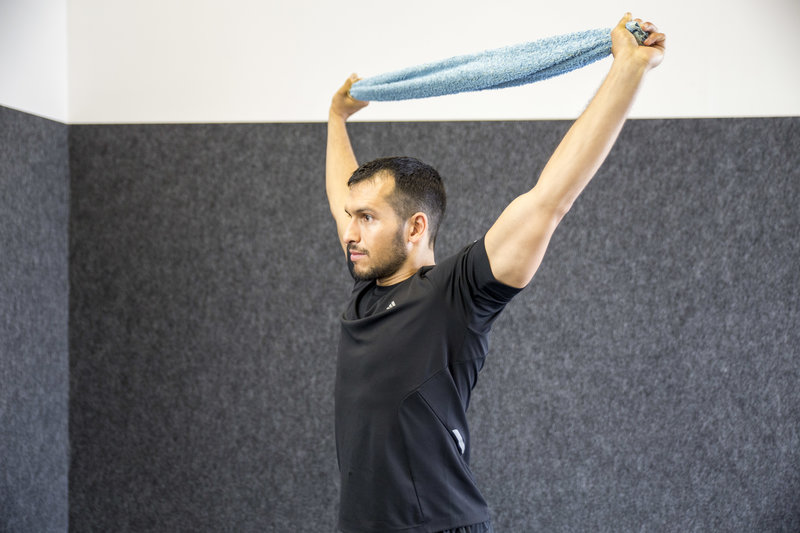 When you are traveling, do you sometimes feel lethargic, stiff and tense? This is often due to a lack of exercise, which is more noticeable on vacation than during your normal day. The following five exercises give you several different sequences of movement to help keep you active and full of energy on your vacation.

Variation a.)
Starting position:
Hold a towel in front of you with your arms straight out to the side. Stand up straight and engage your core. 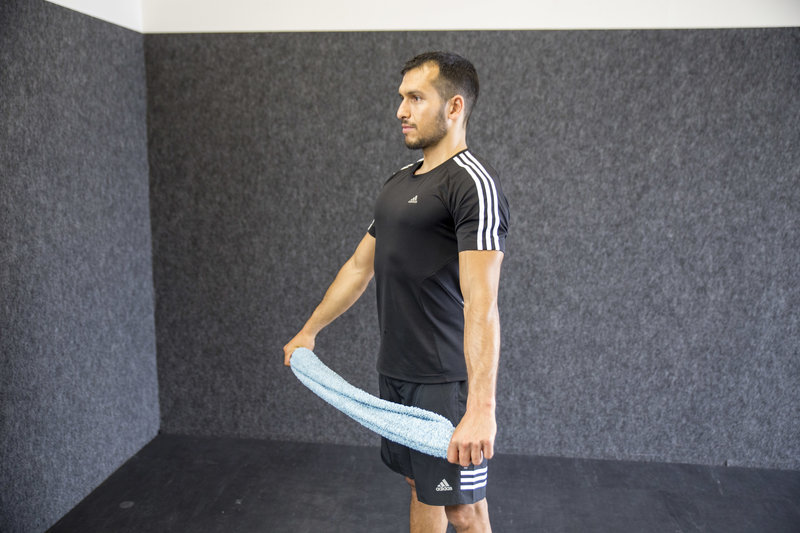 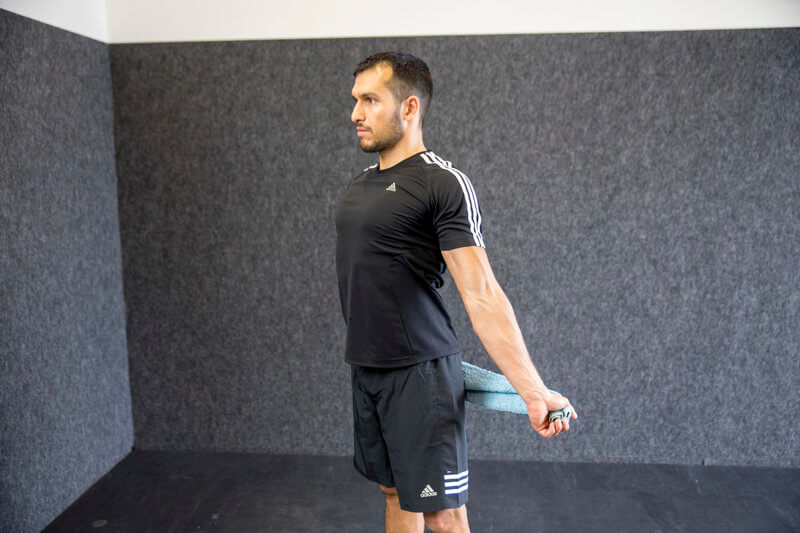 Variation b.)
How to perform the exercise:
Hold the towel above your head with your arms straight out to the side. Alternate between bending to the left and to the right. Repeat the exercise several times.

My tip: Another option would be to use a broom handle or a jump rope. Just don’t use anything elastic because this could lead to improper form or even injury.

2. Worm
Starting position:
Bend over with your legs straight and try to touch the floor with your hands. When you feel a tightness in your hamstrings and your back, hold the position for ten seconds. 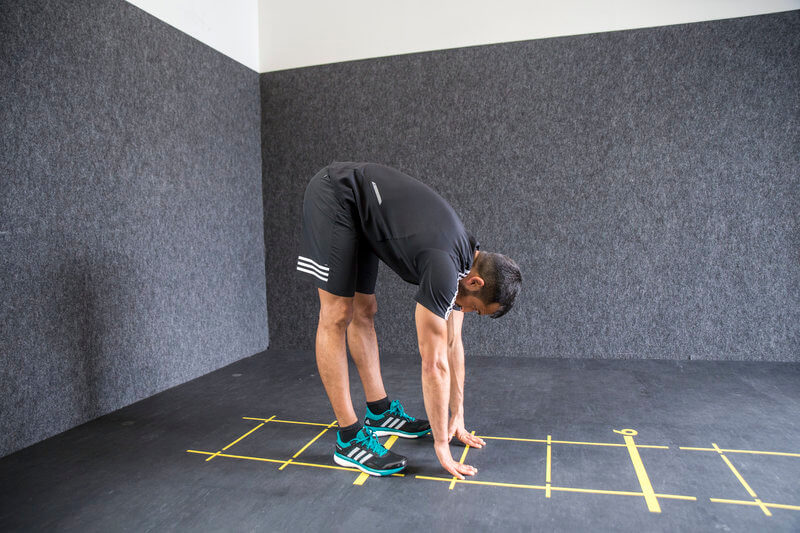 How to perform the exercise:
If you can’t touch the floor with your hands, bend your knees. Walk your hands forward until you are in the push-up position. Then lower yourself down into a deep push-up and hold this position for ten seconds. Then push yourself back up to the starting push-up position as quickly as you can. 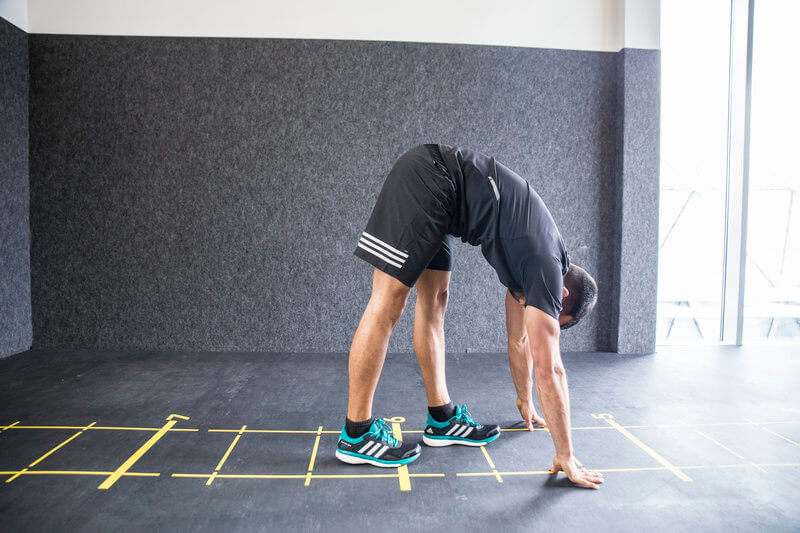 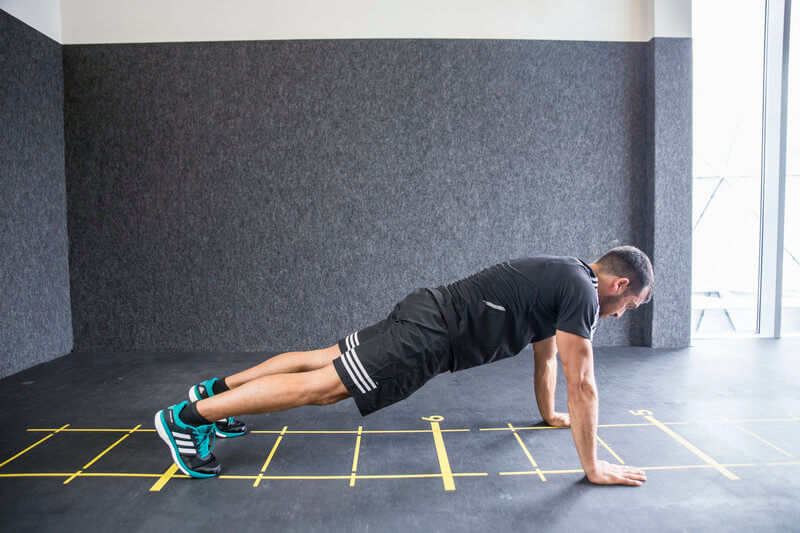 Now press your hips toward the floor while maintaining as much arch in your back as possible. Then push your buttocks in the air while keeping your back straight. 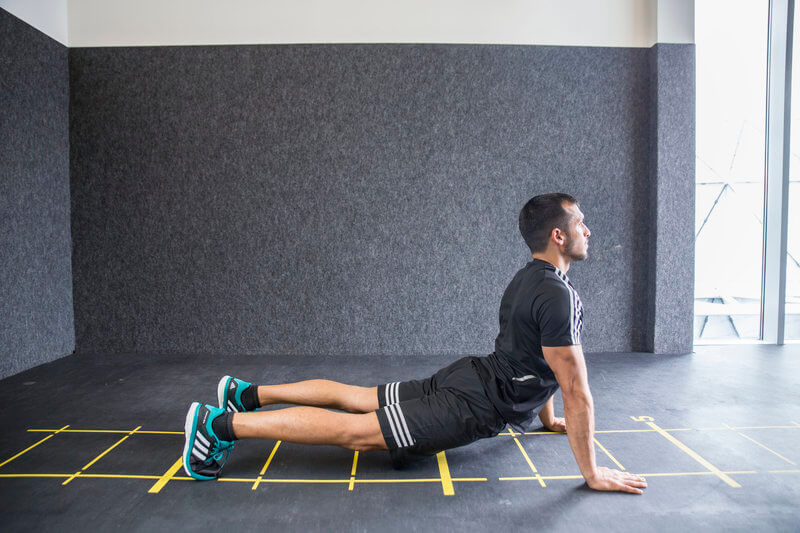 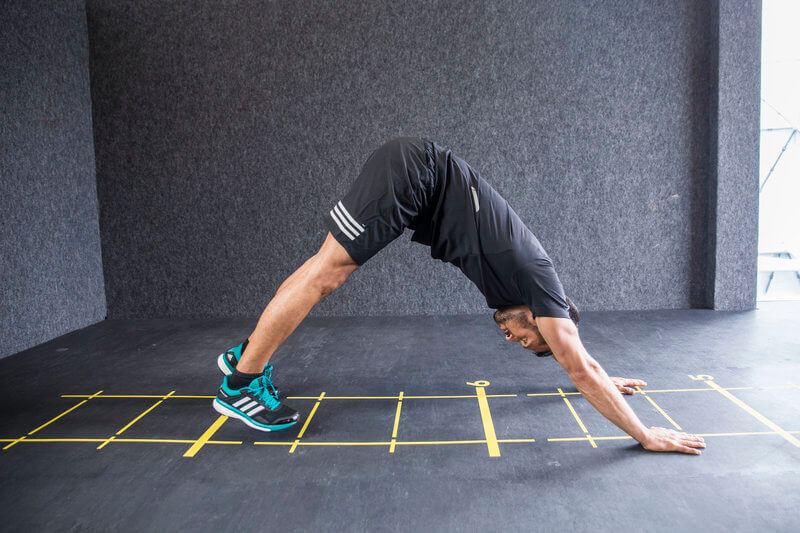 Now walk yourself back into the starting position by taking short steps. Try to keep your legs as straight as possible while doing so. Repeat the exercise several times. 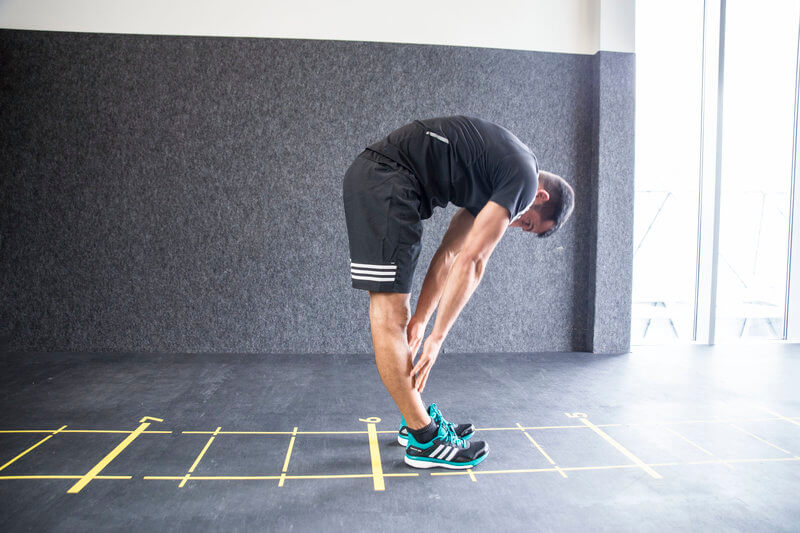 My tip: Instead of going from the starting push-up position to the deep push-position and holding for ten seconds just once, try doing it two or three times. This is sure to get your muscles burning!

3. Chair Dips
Starting position:
Place your hands behind you on the edge of a bench, chair or other stable device. Hold yourself up with your arms straight and your legs straight in front of you with your heels resting on the floor. Engage your abdominal and back muscles. 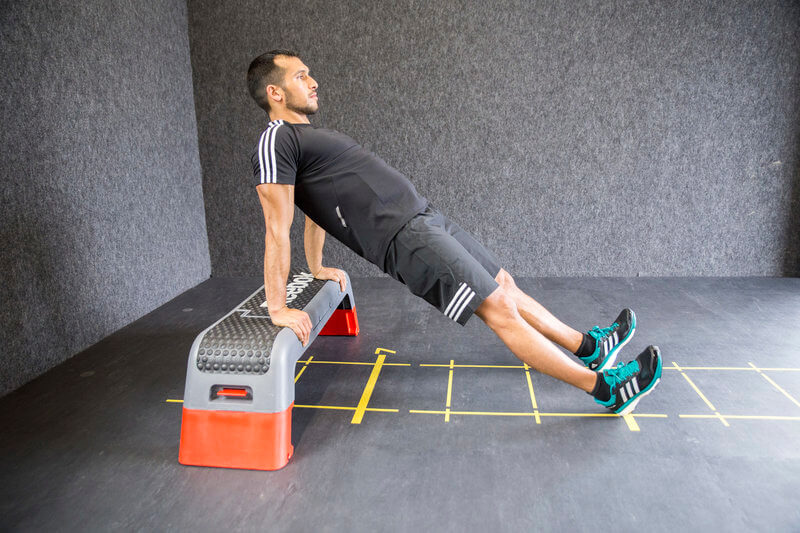 How to perform the exercise:
Lower your butt toward the floor in a controlled manner. At the bottom of the movement, your elbows should be at shoulder level. Then push yourself back up into the starting position. Repeat the exercise several times. 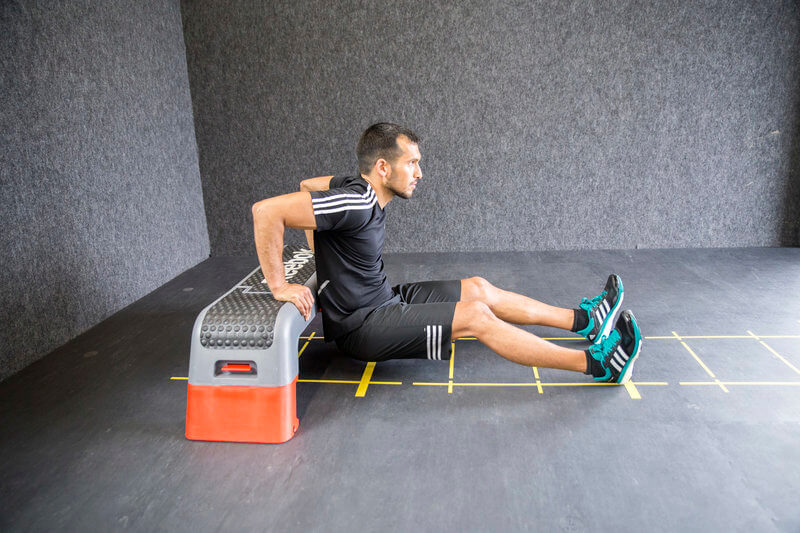 My tip: If it is hard for you to lower your elbows all the way down to shoulder level, then do the exercise with your knees slightly bent.

4. Wall Squat
Starting position:
Stand about a forearm’s length away with your back to the wall. Hold your arms straight out in front of you. Keeping your torso steady, slowly lower down into a deep squat. 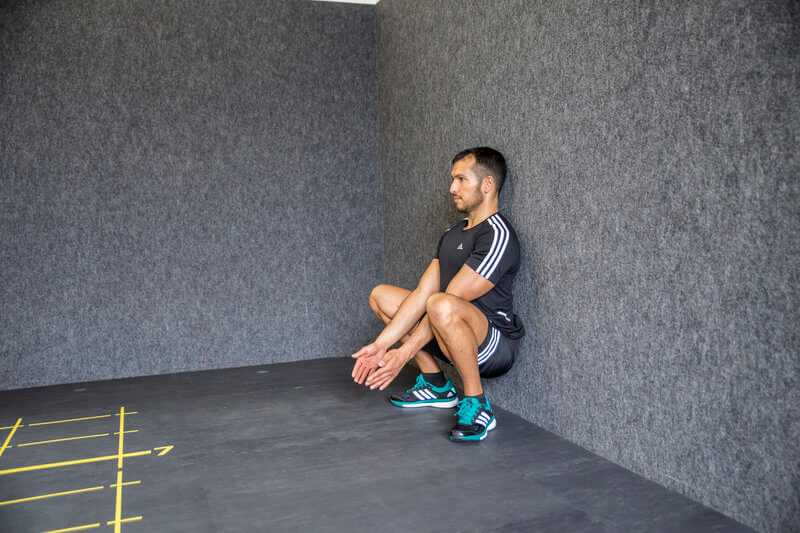 How to perform the exercise:

Variation a.)
Keeping your arms straight, move your arms down between your knees and then back up to the wall. You should feel your chest open. Then push back up to the starting position. Repeat the exercise several times. 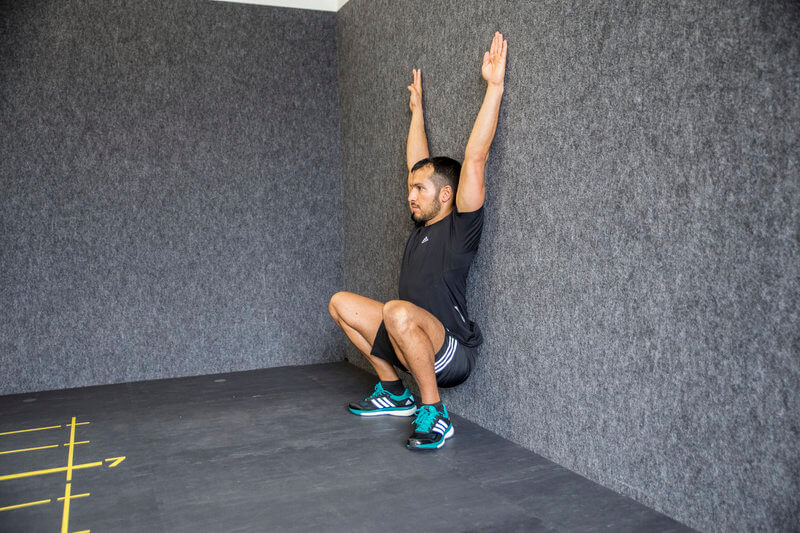 Variation b.)
Keeping your arms straight, push one arm down between your knees while raising your other arm up over your head toward the wall. Your head and eyes should follow your upper arm. Now perform the movement on the other side. Finally, push back up to the starting position and repeat the exercise several times. 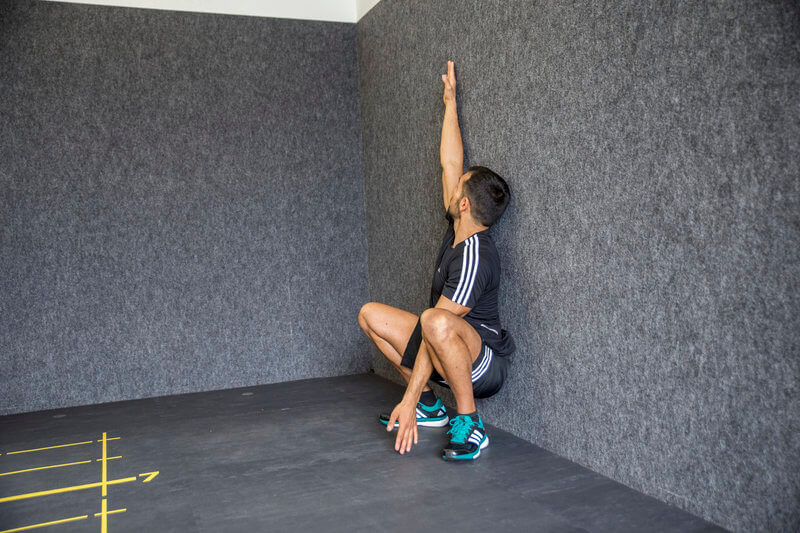 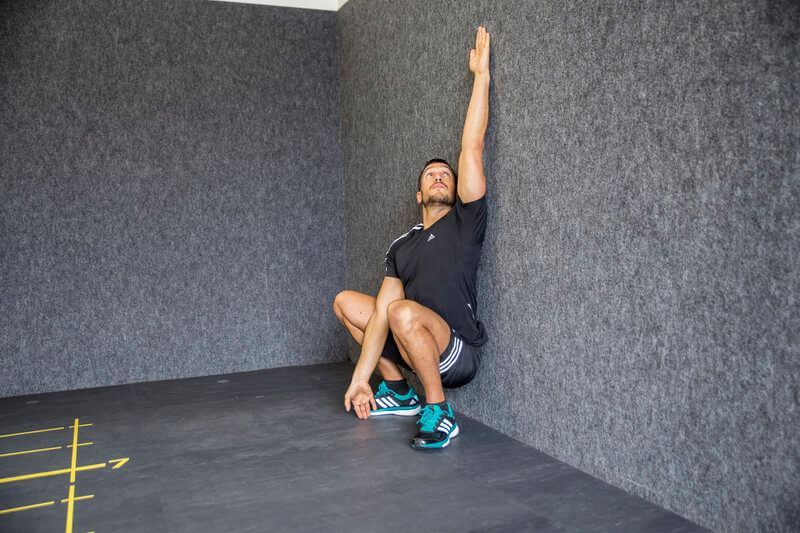 My tip: If you can’t get down into a deep squat, make sure to keep your knees bent at an angle greater than 90 degrees and hold your lower back straight.

5. High Knees Sprint
Starting position:
Stand up straight and position your arms and leg like you are sprinting. 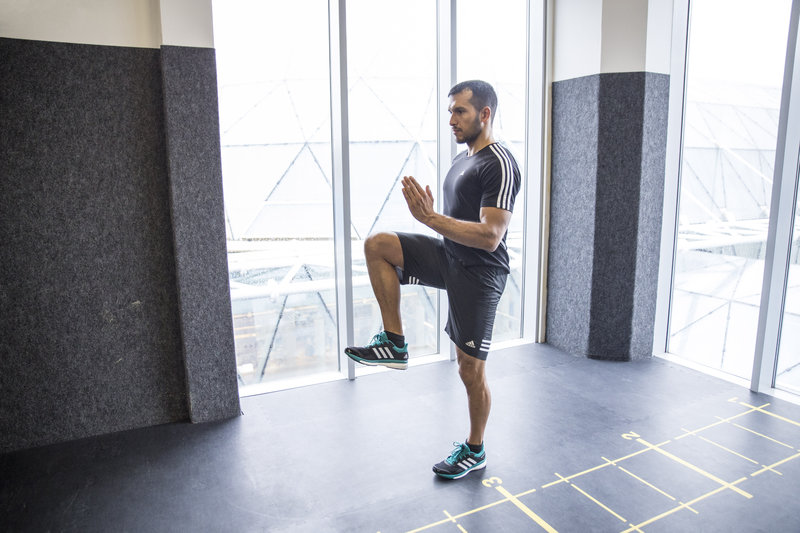 How to perform the exercise:
Start sprinting by raising your knees up to hip level in quick succession. Make sure to pump your arms in sync with your legs. 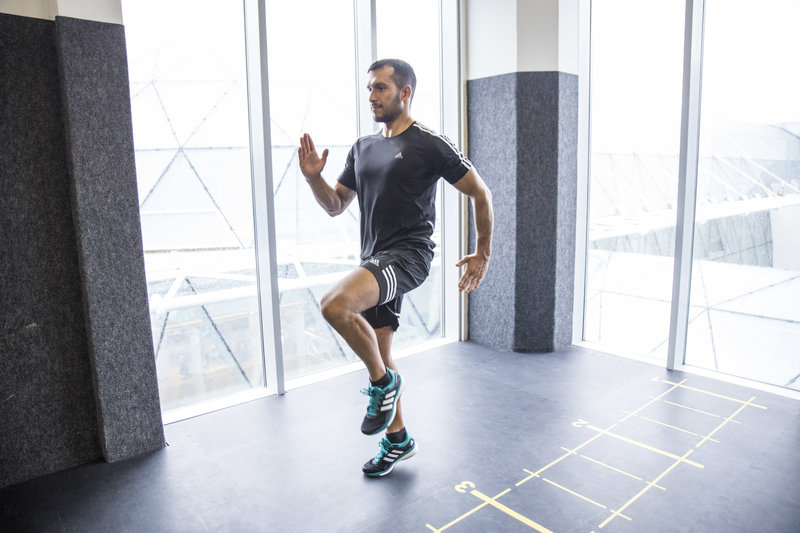 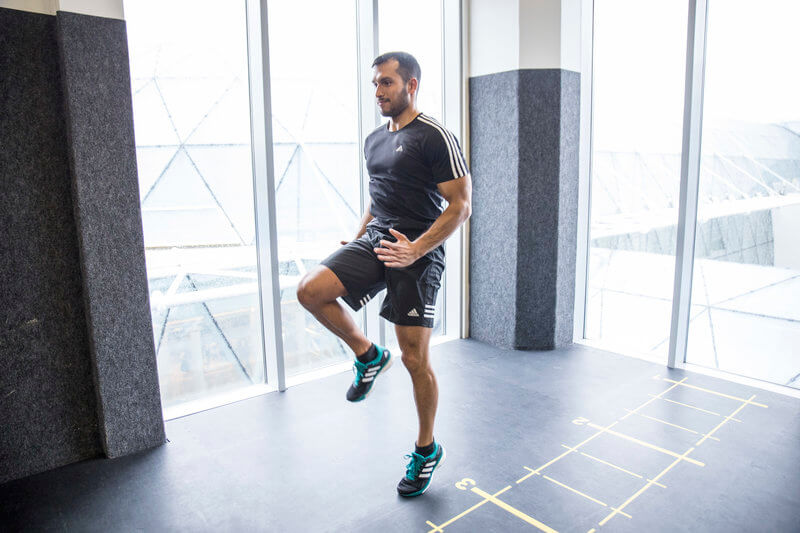 My tip: Work in short high-intensity intervals lasting no longer than 20 seconds. It’s better to start off with more sprint intervals but of shorter duration (for instance, ten seconds).

Sven Friedrich Sven has been working as a personal trainer, conditioning coach, and sports therapist for many years. He is also an expert on fascia and nutrition. View all posts by Sven Friedrich

My Morning Workout: Should I Exercise on an Empty Stomach?