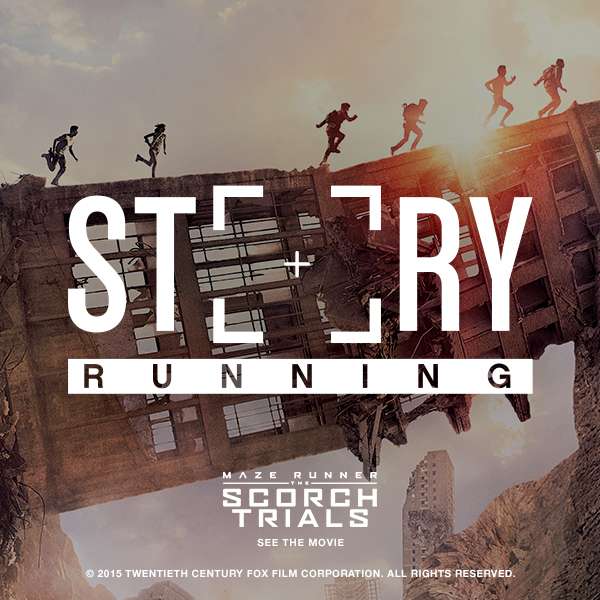 This time, Runtastic Story Running takes your running experience one step further – to Hollywood, to be precise.

We’re very excited to announce that we’ve partnered up with 20th Century Fox, right on time for the worldwide release of the eagerly anticipated movie Maze Runner – The Scorch Trials, Story Running is back with a run based on part two of the Maze Runner saga. Our brand-new, free Story Run The Scorch Trials: Hunted allows fans to immerse themselves even deeper into this fictitious world, while being just as entertaining for those who aren’t familiar with the movies.

“Writing the story for this run was a unique challenge. We wanted to create a Story Run that stood on its own, so that people with no knowledge of The Maze Runner movies or books could jump in and have fun, but also one that appealed to hardcore fans who like to explore all the media and tie-ins related to this popular franchise,” says Story Run author Spencer Baum.

The attraction of Story Running
Just like any other Story Run, The Scorch Trials: Hunted has been developed based on an interval training run. While you – the protagonist – find yourself completely immersed in the story, running away from bounty hunters on motorbikes or dangerous Cranks across the Scorch and through the city’s tunnel system, you’re doing an interval run without even noticing it. Both the story line itself and the incredibly powerful sound of this Story Run lead you through an interval training, prompting you to push harder and run faster at certain points and unconsciously slowing down your pace during other passages. This will not only improve your performance, but time will fly and a half hour will be gone before you know it!

Spencer also seems pretty stoked: “When I heard the finished product for the first time, complete with voiceover, sound effects, and music…well, let’s just say that I think you’re going to love it. Give The Scorch Trials: Hunted a try on your next run or walk, or weight- training session, or however you use Story Runs!”

How it works
If you’re not a Runtastic user yet, download the Runtastic app on your phone. Start the app and navigate to “Story Running” in the drawer menu, then download “The Scorch Trials: Hunted” for free.

Plug in your earphones, lace up your shoes, start an activity – and run!

Skyrunning Stories: We get knocked down… then get up again!