Use training plans to “change your life” like Jean-Guillaume! 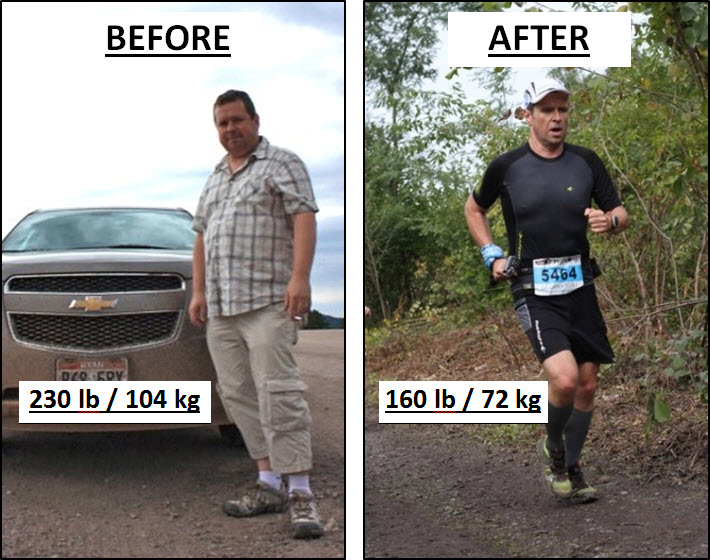 Back in March 2012, I was just a 45 year old who weighed 104 kg (230 lbs) and had a BMI of 32. I had been a heavy smoker – 20 cigarettes a day – for 22 years. My blood analysis showed that both my cholesterol and triglycerides were in the red zone. It was then that I realized I had to do something for my health – for my wife and for my son. But at first, I was nervous that if I even just stopped smoking, I would likely gain 10 kilos (22 lbs). And clearly, I had to lose a lot of weight.

I began a simple hypocaloric diet and learned how to cook delicious meals. But my doctor wanted me to do more. At least three workout sessions per week and not less than 30 minutes each. So I asked myself which sports I could do. As a child, I used to swim and bike a lot. But I needed something more special this time. I didn’t want to use the excuse of incompatible schedules – like how my schedule really didn’t match up with the opening hours of the swimming pool near my home. And I didn’t want to get my hands dirty due to mechanical problems with a bike, either.

So I tried the Wii Fit game. But that was not enough. My wife encouraged me to do a real run. I went to a sports equipment store and bought very nice running shoes with plenty of cushioning. I tried a 20 minutes run and I was certain I was about to lose at least one of my lungs. I had never liked running… EVER. Once, during a sport class at school, a dog bit me because I was the slowest one in the group. When serving in the military, I had a side ache every time they wanted me to run and I hated it. But in March 2012, one early morning, I thought that I just had to do something special to change my life. Like following the motto: “No pain, no gain.”

The biggest advantage of running is that it’s easy to listen to music while exercising. And I’m a big fan of music – I’d even call myself a musician. Maybe music could help me, I figured.

Professionally speaking, I’m in mobile and internet development. I talked to colleagues who I knew were runners to see how they ran with their lovely smartphones and music in their ears. And that was when I discovered Runtastic. Well, the app was pretty cool. But that was not the point. A cool app wasn’t enough to keep me running for the long-term, ensuring I would continue to get fitter and burn fat. What really changed my whole life was the discovery of Dieter Baumann’s training plans.

I bought the “Run 50 min. after 10 weeks” training plan. I remember my first session. It was March 12th, the same day I began my diet. And, it was definitely the first day of the rest of my life. I mean it. I ran this ridiculous interval session: 1 min. running, 1 min. walking, 10 repetitions. I wasn’t even out of breath. Ten weeks later, I was able to run one hour without being completely out of breath. A kind of miracle for me! At the age of 45, I had finally learned how to run thanks to an iPhone app.

I then thought: “I could run a little faster. Let’s get crazy!!! I’ll try another plan. So I bought the “10k in 60 min” training plan. After finishing this plan I have not only lost 32 kg (70 lbs), but I can even keep up with real runners in a real run!  Instead of running just a 10k, I made a stupid bet with a friend to participate in a very popular French run: “Les 20 km de Paris.” I ran this 20k in 1 hour and 50 min. Me! The former big, fat smoker. Well, I actually stopped smoking 2 weeks before the run thanks to one single hypnotherapy session. The guy used something I can focus on to make me forget I was a heavy smoker. I guess it was because I told him about running.

A few months later, I finished the Runtastic “half marathon” training plan and ran my first 13.2 mile run in Paris in 1 hour and 46 min. I remember my wife and son following me LIVE on Runtastic while waiting at the best spot to take pictures. One year after my first 20k race, my whole life has changed. I ran my second “Les 20 km de Paris” in 1 hour and 38 min. My wife is now using Runtastic, too. Many of our friends want to do what I’ve done. I always tell them to start with this “too easy” training plan for beginners on Runtastic.com.

I’ve completed more than 12 races, on a mix of roads and trails, in one year. I’m now preparing my first “Marathon de Paris” before doing a few longer runs. My goal is a 72 km mountain trail race at the end of 2014.

I even have a blog about running. And guess which are my most-read articles? Those about Runtastic, of course – although they’re in French, sorry!